I have been doing lots of research on Japanese and Denmark dolphin hunts, and I am really starting to hate Taiji and the Faroe Islands. I have images of the slaughters stuck in my head as I try to fall asleep at night, I can't stop thinking about them during the day, and I really don't even like the color red anymore. The words 'Taiji' and 'Faroe' just make me sick. Those two small places have the largest and most gruesome killings of dolphins in the world. Taiji shocks me because most of Japan didn't know about the slaughter until recently, and the Faroese shock me because they are poisoning the minds of children by drilling the killings into their heads. Horrible events take place in both countries, and it is very wrong. Number one, there's so much mercury in the meat. Number two, we need the oceans to survive. Number three, it's just downright cruel. I would very much like to go to these countries right before a hunt starts. I would free all of the dolphins and then give the killers a piece of my mind. I would show them a diagram of the human brain next to a dolphin's brain, to show them how much larger the dolphin's is than the human's. They need education on how dangerous it is to eat them, how intelligent their helpless victims actually are, and the meaning of humanity. I know that the Taiji hunt is slowly but surely coming to a stop, thanks to The Cove, but I am beginning to think that the Grindadrap (the Faroe Pilot whale massacre) will not end anytime soon because less people are aware of it.

This photo was found on walrettung.org. They have full credit for the picture. Me giving you the site address is no different than showing this picture. Besides, the WDG (Whale Defenders of Germany) probably want more people to know about their site. WARNING: CONTAINS BLOOD 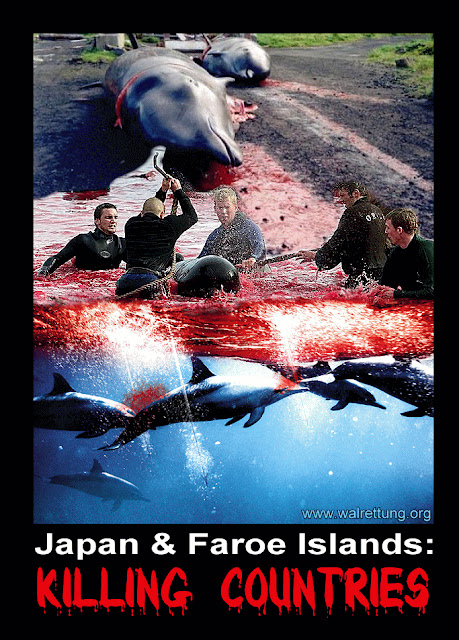 If you live in Japan, don't feel offended by this. This is only Taiji! I am not against Tokyo and all of the other Japanese who think that this horrible. The same goes for Denmark. This is only the Faroe Islands (that I know of anyway)!
Posted by Haley at 8:52 AM